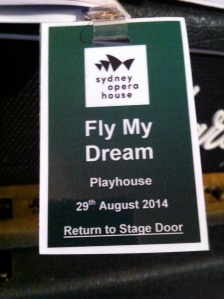 Performers on the night came from far and wide, from places such as China, New Zealand, Wollongong and the Greater Western Sydney region. Tabua Harrison obviously represented the University of Western Sydney contingent as there were participants from the UNSW, Sydney University and the Conservatory High School who were also involved in this enjoyable occasion.

Sharing the stage with many unique cultures.

Arriving at the stage door of the opera house for sound check was both exciting and terrifying, one holds a great deal of expectation even when you are the audience, you expect nothing but quality performances and splendor, but to be the attraction on this night was a real pleasure and a privilege.
Tabua Harrison walked onto stage at approximately 8pm, it was a fleeting yet, energizing performance, the audience were very enthusiastic and one sensed that it was a nice change of pace to hear some loud tribal-like rhythmic drums and timbrel explosions via a pulsating electric guitar. The easiest part of this day was the performance, why was this so? One shall never know, perhaps it is better left unanswered. One can comprehend that for an undertaking such as this can take several months or even years to organize, however, it is with these exchanges, a tangible cross cultural pathway is generated. A paramount interchange is amplified significantly when we share our artistic endeavors as we did tonight on the playhouse stage. By sharing our music, our literature, and our stories with one another, we can be certain that traditions like this in the Western/European paradigm will continue for many years to come.

Overall, the experience and professionalism that I observed, from stage management, security, chefs, and the staff were extraordinary. There appeared to be a higher level of consciousness at work here, in this awe-inspiring building, however, I appreciate that an organization such as the Sydney Opera House is an Australian icon,a symbol of excellence.